A 4-year-old boy hasn’t woken up in almost two weeks in his hospital bed after police say his aunt beat him.

El Paso police say Jessica Nunez, 31, brutally beat the 4-year-old boy and his 5-year-old sister. Police say she is their aunt, and that she was taking care of the boy and girl when the alleged incident occurred.

Their mother said her daughter has been crying to her, saying she wants her brother to come home. But doctors said that might not happen.

Hospital staff told the boy’s mother he may not wake up, but if he does, it will be a long road to recovery.

CBS4 On Your Side’s Holly Bock spoke with the mother of a young boy who was allegedly beaten into a coma by his aunt. (CBS4 Local)

In pictures sent to us by his mother, his hands are interlocked with his family’s, and his favorite stuffed animals by his side. 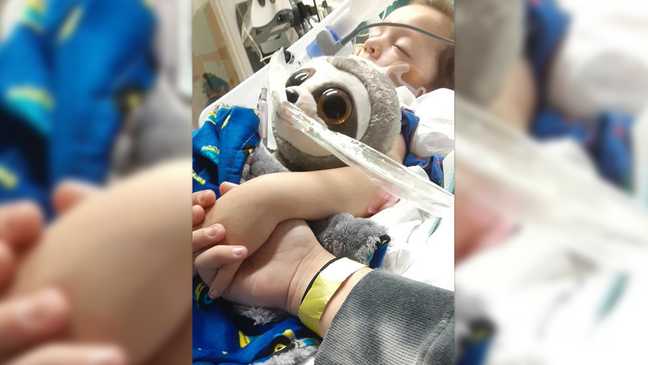 A 4-year-old boy is clinging to life after police say he was injured by his aunt. (Photo Courtesy: Family)

While speaking with their mother, she tells CBS4 her son hasn’t woken up since May 22. She said his lungs and heart are getting better but he is having a hard time breathing on his own.

Police said the boy was found unconscious when they arrived to Nunez’s home in the Lower Valley on May 22.

CBS4 obtained the arrest affidavit and it shows the boy had suffered life-threatening injuries, including a brain injury and collapsed lung.

His sister had bruises on her arms and face and a torn ear cartilage.

In an interview with investigators, the little girl told them Nunez hit her hard enough in the face that she fell into a door and hit her head, causing bruises all over her ear and head.

She added that Nunez would hit her with items like a back scratcher, a stick and would fold up a phone charger and smack her with it.

While Nunez sits behind bars, the mother sits alongside her son’s hospital bed, asking for the community’s thoughts and prayers while she waits for her little boy to open his eyes.

A 4-year-old boy is clinging to life after police say he was injured by his aunt. (Photo Courtesy: Family)

Nunez is being held on a more than $1 million bond. Her bond hearing is scheduled for Thursday morning.