An “active shooter” has been reported at a King Soopers grocery store in Boulder, Colorado, police said.

A law enforcement source told ABC News that officers responded to a report of someone shot in the parking area, and when they arrived at the scene, a suspect opened fire on them. 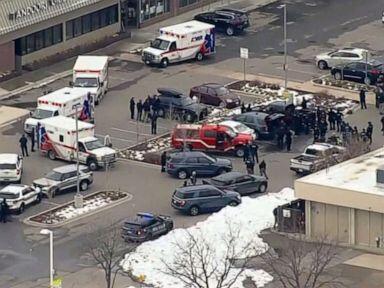 KMGH – PHOTO: Ambulances and responders gather near the site of a reported shooting in Boulder, Colo., March 22, 2021.

The suspect allegedly used a long gun, according to sources.

There are reports of multiple victims with injuries, but no further details are currently available, according to a source.

Nearby eyewitnesses shared videos from outside the lot, which show officers ordering the suspect to come out of the store with his hands up and surrender. 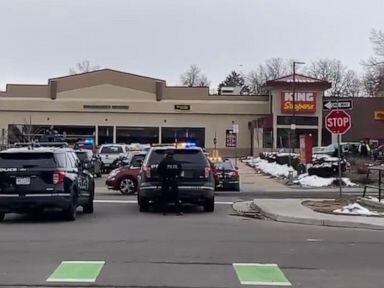 BrookAitken.com – PHOTO: Members of the Boulder Police Department surround the King Soopers store on Table Mesa in Boulder, Co., after reports of a shooting on March 22, 2021.

Eyewitness Andrew Hummel told ABC affiliate KMGH he was at a store when he heard the gunshots and ran out of the shopping center with others.

“Everybody kind of sprinted toward the back of the store,” Hummel told the station.

Hummel said his roommate, who worked at the store where the shooting happened, went to a storage room and hid there with other customers, texting updates. 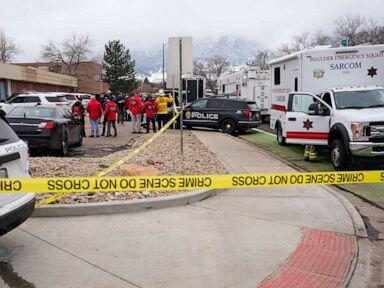 David Zalubowski/AP – PHOTO: Police work on the scene outside a King Soopers grocery store where a shooting took place on March 22, 2021, in Boulder, Colo.

“Yeah, I think one of the biggest scary text[s] that he sent he just said, ‘I love you guys, like thank you for everything, in case, like, things go bad,'” Hummel said. “That was a really hard text … that’s something that I would never want to hear from any of my friends because I knew the seriousness of what was going on and I was horrified. It was truly horrifying.” 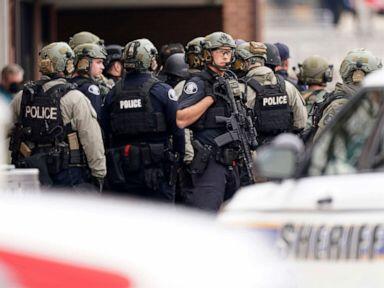 Around 7:10 p.m. EST, the Boulder Police Department tweeted out an alert asking people about three miles from the shopping center “to shelter in place” while officers respond to a report of an “armed, dangerous individual.”

“PD is investigating to determine if this is related to King Soopers shooting,” they wrote.

“Like my fellow Coloradans, I am closely watching unfolding events at King Soopers in Boulder,” he wrote. “My prayers are with our fellow Coloradans in this time of sadness and grief as we learn more about the extent of the tragedy.”

In another statement later Monday evening, Polis asked for residents to have patience as the investigation continues.

“Right now, the biggest priority is to let local law enforcement and the City of Boulder to do their work to ensure the safety of those involved,” he said.