“We have a very chaotic incident, a very chaotic night in the beach,” Virginia Beach Police Chief Paul Neudigate said during a press briefing following the shootings. “Many different crime scenes.”

The gunfire started shortly after 11 p.m. local time. Officers patrolling the 1900 block of Atlantic Avenue in a resort area first heard multiple gunshots around 11:20 p.m. At the crime scene, in the area of 17th Street and 22nd Street, eight gunshot victims were found, according to Neudigate. 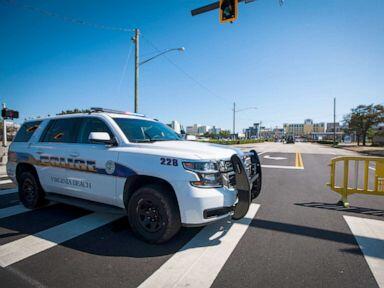 They were transported to local hospitals with injuries ranging from serious to life-threatening.

Police believe the shooting was preceded by a conflict that led to a physical fight, based on the preliminary investigation.

“At some point during the physical altercation, several individuals produced firearms and began shooting at each other, resulting in numerous people being wounded,” the Virginia Beach Police Department said in a statement released Saturday afternoon .

They each have been charged with seven counts of felonious assault, use of a firearm in the commission of a felony and reckless handling of a firearm, and are in custody at Virginia Beach City Jail, police said. 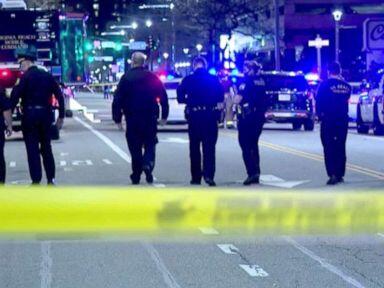 While at the initial crime scene, officers heard gunshots in the area. Responding officers found an adult female victim in the 300 block of 19th Street near Pacific Avenue, police said. She died of her gunshot injuries at the scene, according to police.

The victim, who police said was a bystander, was identified as Deshayla E. Harris, 27, of Norfolk, Virginia.

There is no suspect information yet for the fatal shooting, which is believed at this time to be unrelated to the initial shooting, authorities said Saturday afternoon.

A fatal officer-involved shooting also occurred near the scene of the second incident, in the 300 block of 20th Street near Pacific Avenue, police said. A uniformed Virginia Beach officer “encountered an armed citizen,” police said in the update Saturday. The man, later identified as Donovon W. Lynch, 25, of Virginia Beach, died at the scene, authorities said. The police officer was not shot.

“As standard procedure, the officer involved will be placed on administrative assignment pending the outcome of the investigation,” the department said in a statement early Saturday morning. “The involved officer is assigned to the Special Operations Division. The officer has been with the department for 5 years.”

Police are still determining if any of the three incidents are connected to each other and if there are additional suspects. All were believed to have occurred outside, Neudigate said.

At some point during the three shooting incidents, a Virginia Beach police officer was also hit by a car, authorities said. He was transported to the hospital with minor injuries and has since been released, police said Saturday afternoon.

The department said it has increased the police presence in the resort area for the rest of the weekend following the shootings.

Virginia Beach police initially confirmed there had been a shooting at the oceanfront with “several victims.”

“VBPD is investigating a shooting involving several victims with possibly life-threatening injuries. Large police presence at the oceanfront between 17th and 22nd St. Please avoid the area at this time,” the department tweeted.

Sentara Virginia Beach General Hospital confirmed to ABC News early Saturday that it was treating six patients with gunshot wounds. Their conditions were not immediately available.